The 2016 UK Prosperity Index finds that UK cities are failing to turn their economic growth into better lives for people. 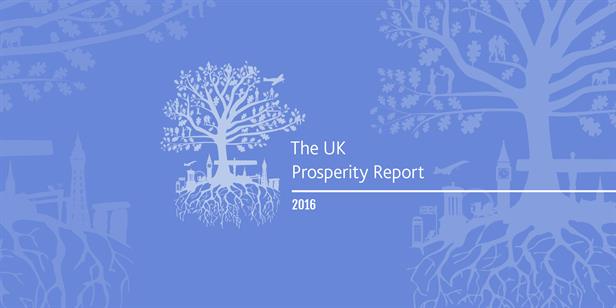 Over the past decade, the UK has on average ranked as the world’s 14th most prosperous country in the global Legatum Prosperity Index™, yet the top ten has eluded Britain. Why? Something has held the UK back. Top-level prosperity is not the whole story: its distribution also matters. Given that Prime Minister Theresa May made clear her ambition to create a country that “works for everyone”, that distribution of prosperity is pertinent.

The UK Prosperity Index shows that a country may flourish, but that the opportunity to flourish does not reach all citizens. Far too many cannot pursue and achieve their potential. It shows for whom the country is not working, and why.

Such opportunity is most lacking in urban areas, where the absence of life chances hinders an area’s ability to transform its wealth into wider prosperity. Without the ambitions and achievements of all, national prosperity is hindered. Britain cannot be her best. For life outside the EU, she needs to be.

The recent referendum result made clear that a large proportion of Britons feel left behind by globalisation—that, for them, aspiration and opportunity have been extinguished. They are right. The UK Prosperity Index shows a significant negative relationship between prosperity and the share of the Leave vote. Those areas that voted to leave the EU were far more likely to be areas that prosperity has passed by, areas for which the country is not working.

In particular, the absence of opportunity and sense of despondency stand out in the Index as predictors of a high Brexit vote share. These are areas where people earn less, say they are struggling to get by on their income, and are more likely to have health problems or no qualifications.

The Index shows a clear failure by every level of local, national, and supranational government to deliver for many parts of the UK. Britain has prospered greatly over the last 40 years, but the journey from poverty to prosperity has not been open to all.

This Index is a rallying call for a new agenda of localism capable of driving wealth creation, sparking aspiration, and supporting fulfilment. Here it points to the power of strong social capital in communities to deliver transformation.

As Britain shapes her future outside the EU, the UK Prosperity Index—mapping prosperity through seven categories across 389 local authority areas—highlights the urgent need to address how wealth is translated into prosperity across these islands. It is the first full subnational Prosperity Index ever produced, and the first time that this data has been brought together to map prosperity in the UK at this level.

The UK cannot truly succeed as a global nation and as a country that works for everyone without the aspiration and achievements of all.

We hope you enjoy the 2016 UK Prosperity Index.