The UK Prosperity Report reveals Britain is more prosperous in 2015 than it has been at any point in the past seven years. The data is based on findings from the 2015 global Legatum Prosperity Index, published in November this year. 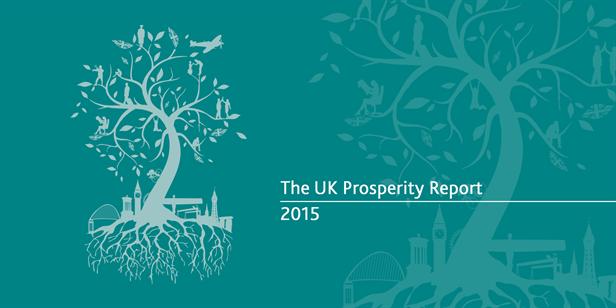 As Britain went to the polls in May 2015 to cast judgement on the Coalition Government, most people expected another hung parliament. Liberal Democrat and Conservative politicians packed their bags and the media prepared to cover weeks of political negotiations. But the Conservatives secured a shock victory, and were back in government with a majority after nearly 20 years.

The Prosperity Index charts the record of the Coalition in government, capturing British prosperity just before the 2008 financial crisis hit, charting our slide down and our climb back up. Its key findings reveal that David Cameron’s victory was not surprising at all.

In absolute terms, Britain is more prosperous in 2015 than at any point in the last seven years. As a nation we enjoy greater freedom, opportunity, and economic security than we did on the eve of the crisis. Our economy sits five ranks higher than before the crisis; we feel healthier, safer, kinder, and more tolerant than back in 2007/8; and we have one of the strongest beliefs in opportunity of any country in Europe.

Yet something much clearer changed in the 12 months before the election. Something flipped in the British psyche; people began to feel a lot more positive about the state of the economy and their own financial prospects. Economic optimism rocketed and so did perceptions of the job market. Whereas just 18% of people thought it a good time to find a job in 2013, by 2014 that had reached 49%—higher than before the crisis, and in 2015 it grew higher still.

Opportunity didn’t just sweep the middle classes either. We see some of the most remarkable transformation among the poorest fifth of Britons. Just 6% of the poorest-around one in twenty-had a full time job in 2009. Today that is nearly one in three. The number of people cast aside as permanently out of the workforce has fallen by nearly a third. As a result, the gap between rich and poor in full time employment has been halved.

The challenge now for David Cameron’s government is to keep British prosperity growing. Whilst in absolute terms our prosperity is still increasing, we are beginning to struggle to keep up internationally, falling two places to 15th in the 2015 Index. Britain remains extremely competitive for Entrepreneurship & Opportunity (up two places to 6th this year), Governance (9th), Personal Freedom (12th), and Social Capital (12th). In Health, Education, and Safety and Security, the story is not so positive.

The Coalition had a strong record, but if Britain wants to make it into the global top ten alongside key allies like Australia, Canada, and New Zealand, the new Conservative government must improve our international competitiveness in key areas of Prosperity. If our progress in the Prosperity Index can be consolidated and extended, Britain’s future will be bright indeed.

We hope you enjoy this 2015 UK Prosperity Report.

By Harriet Maltby, Head of Policy Research at the Legatum Institute

ABOUT THE 2015 LEGATUM PROSPERITY INDEX™

The annual Legatum Prosperity Index™ is the only global index that measures national prosperity based on both wealth and wellbeing (objective and subjective data). The Index—which ranks ranks 142 countries across eight categories: the Economy, Entrepreneurship & Opportunity; Governance; Education; Health; Safety & Security; Personal Freedom; and Social Capital—seeks to redefine the concept of national prosperity to include, as a matter of fundamental importance, factors such as democratic governance, entrepreneurial opportunity, and social cohesion.