The 2016 Legatum Prosperity Index™ finds that New Zealand’s unrivalled ability to turn its wealth into prosperity has put the country in 1st position in this 10th edition of the Index. 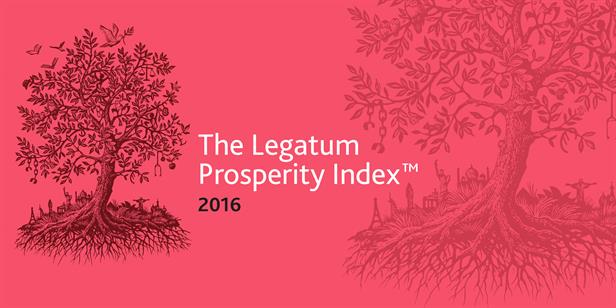 “GDP measures everything, except that which makes life worthwhile”
—Sen. Robert Kennedy

As a measurement of prosperity, the Legatum Prosperity Index™ (www.prosperity.com) is unique. It gives a far truer picture of the life chances for the world’s population, and the performance of nations, than any Index of GDP alone could hope to. True prosperity is as much about wellbeing as wealth and New Zealand, which tops the Index, is a model for delivering both.

The 10th Legatum Prosperity Index™ covers 149 countries, and is published today by the Legatum Institute, an international think tank based in London. Our focus is on understanding, measuring, and explaining the journey from poverty to prosperity for individuals, communities, and nations.

WHY ARE SOME COUNTRIES POOR BUT PROSPEROUS?

The Index also shows how much prosperity a country delivers given its wealth. The top performing countries: New Zealand, Finland, the UK, Canada, and Australia, have in common open markets, high levels of personal freedom, and strong civil society.

However, developing countries like Rwanda, Malawi, and Nepal also perform well, proving that with the right foundations, prosperity can flourish with relatively little wealth.

PROSPERITY IS AT RISK ACROSS THE WORLD

Countries that have not invested in the foundations of prosperity growth see that prosperity at risk. Latin American prosperity, unlike any other region, is still closely tied to its economic fate. Prosperity gains have not been the result of anything but rising wealth. This prosperity is at severe risk.

The opposite pattern is seen in Asia, where the countries that have made the most significant progress have invested in the foundations of prosperity. Indonesia, one of the biggest risers in the Prosperity Index over the past decade, has seen improving freedoms and a rapidly strengthening society.

The risks are not confined to those yet to see high levels of prosperity. The Index sees US prosperity stagnate, despite rising wealth. Falling health outcomes, a worsening security situation, and an economy that is not delivering on opportunity are driving relative decline.

A DECADE OF DATA

Now in its 10th year, the annual Prosperity Index can track changing prosperity across the world. It captures rapid risers like Sri Lanka, Cambodia, and Indonesia, and those countries plummeting down the ranks, including Venezuela, Tunisia, and Honduras.

The decade of data can also offer a new perspective on the trajectory of a nation, offering insights on the impact of national political decisions. It shows that the UK’s trajectory through the global financial crisis has been one of the most positive in the world, with rising prosperity the result of concerted social reform, not economic progress.

Other key findings from the report include:

“If people across the world are to make the journey from poverty to prosperity the Legatum Prosperity Index not only shows how it can be done and which countries are doing it but also highlights which countries, rich or poor, are failing to offer their citizens the life chances everybody needs in order to flourish and why”.

Alexandra Mousavizadeh, Director of Indices at the Legatum Institute, said:

“The Prosperity Index is a leading measure of global prosperity and a powerful tool for governments, the private sector and individuals alike. Tracking how prosperity develops nation by nation has never been more important.”

“For many years the Legatum Prosperity Index has provided an innovative and robust metric with which to compare prosperity, including but extending beyond standard income measures, across countries and over time. The methodology behind the index is robust, transparent, and accessible, while the statistician seeking more detail can delve deeper into the index construction. At a time of world-wide interest in assessing human well-being in ways that extend beyond standard GNP based metrics, the Index is a best-in-class example of how to combine a range of important variables into a metric that is credible and accessible to policymakers and the lay reader, as well as academics.”

A note on data: We use data drawn from well-known global data sources such as the World Bank, ILO, WHO among others, in addition, we collaborate with the global polling company Gallup. See Notes to Editors for further information.

To access the full report, data, and analysis, visit www.prosperity.com.

For more information or to arrange an interview please contact:

The Legatum Institute is an international think tank and educational charity focused on understanding, measuring, and explaining the journey from poverty to prosperity for individuals, communities and nations. We believe true prosperity is as much about wellbeing as it is wealth, if all people are to flourish. The Legatum Prosperity Index™, our signature publication, ranks 149 countries in terms of wealth and wellbeing. To find out more please visit www.li.com and www.prosperity.com.